My trip to Morocco was one of the most incredible experiences of my life – never before had I embraced such spontaneity and (dare I say) reckless abandon in my entire life, and never had I felt more alive. I never want to forget the desert, the spices, the people, the magic… 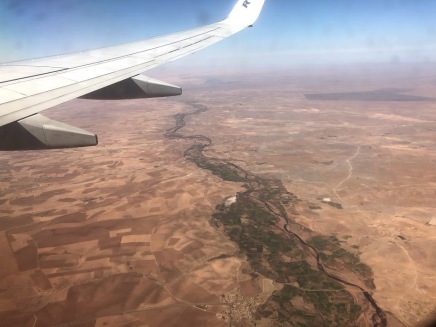 On my first day in Morocco, as I stepped off the plane, the heat was palpable as it rose from the pavement, and for the first time, I could understand how people could see mirages in the desert. The airport was like none I’d ever seen before, with a distinctly African, modern design, high vaulted ceilings, and every sign translated into at least three languages – Arabic, French, English.

In anticipation of travel to the rather conservative country, I had opted for long pants, a long sleeve shirt, and close toed shoes, and as I went through security, I was glad that I had. The tourists stuck out like a sore thumb, especially those culturally-ignorant girls who foolishly neglected to dress according to local custom – their long legs and exposed shoulders drew the attention and eyes of everyone, including, I was surprised to find, my own. In this country removed from Western traditions and culture, the exposure of knees, thighs, bosoms all felt strangely out of place, even coming from a Western perspective.

Once I passed through security, I admired the new stamp in my passport declaring my entry into Morocco, then proceeded into the main gallery, which had kiosks interspersed across the floor, with hawkers advertising sim cards, money change stations, and taxis. Stupidly, I only changed out enough euro for 500 dirham (the equivalent of 50 euro), which I would come to discover is enough for perhaps a little more than a day in the city. All sense of monetary value would come to be skewed throughout my stay in a country where a good dinner cost 150 dirham and a cab ride could run up to 30 dirham – if you were able to haggle, that is.

My hostel had arranged for a driver to pick me up at the airport, and after 20 minutes of searching for him, I was finally able to load my bags into his car – after affirming multiple times that he was, in fact, my driver – and entered the medina of Marrakesh.

The driver was amicable, conversational, and a great guide as he wove his way through traffic, my heart in my throat the entire time. I had thought that the French were bold drivers, but nothing could compare to the daredevil drivers of Marrakesh. As we drove through the Pink Palace’s gates (the Prince of Morocco’s home and the gateway into the medina), the driver told me about the history of the orange trees in the small grove between the two entry gates.

My French language ability turned out to be especially useful during my stay in Morocco – the shopkeepers were much less likely to try to take advantage of me if they thought I was French as opposed to an American, it turns out. As I asked my driver (in French) for his opinion on my itinerary, my eyes were glued to the scenes rapidly passing by. Marrakesh is an odd mixture of Old and New World culture – my brain kept trying to reconcile the seemingly contradictory images; the bearded men in traditional clothing who were wearing shiny new Adidas trainers while driving carts pulled by donkeys; the motorcycles that pulled wooden carts laden with oranges, mandarins, and bananas; the women hidden beneath their hijabs and burkas while other local women allowed their hair to flow freely; the vendors in the souks who sold both Nike knockoffs and traditional leather, hand tooled baboush slippers. The whole city seemed to be a walking, talking, breathing oxymoron, and yet one that everyone had accepted without prejudice, argument, or question.

The car stopped as we approached the hostel; the driver allowed the car to idle while we waited for someone in the hostel to come guide me to my lodging. When at last my guide arrived, I fumbled through my wallet, trying to figure out how much I was supposed to pay the driver. He gently tugged two 100-dirham bills from my fingers and handed me my suitcase. I shrugged and accepted it – twenty euros was a small price to pay for the convenience. Nacer, my guide, took my suitcase and led me from the paved road down a narrow cobblestone street (more of a walkway – I couldn’t imagine that a full-sized car had ever made its way down there) tucked between a series of peach, tan, and brown buildings.

As a solo female traveler, my guard was naturally up as I followed Nacer down the unfamiliar walkways of the medina, but immediately felt reassured when we stopped in front of a thick wooden door cut in the traditional style, the top tapering to a tip. As I followed him in, I was greeted by another American woman who, it turned out, was the manager of the hostel, and a former participant in the TAPIF program I was in at the time.

Charlsey’s fiery red hair stood out from the dark hair I’d gotten used to seeing in the city, her greenish eyes welcoming from behind her thick-rimmed round vintage glasses. She handed me my first cup of “Moroccan Whiskey” tea (non-alcoholic) as I paid her for my stay (4 euro per night was easily the least I’d ever paid for a hostel, especially one with free tea and traditional breakfasts). I peered into the tea, garnished with a sprig of mint, and took a tentative sip – I was surprised to find that it was very sweet, like a hot version of Southern sweet tea that was a staple in my house.

I asked her how she’d ended up going from TAPIF to managing a hostel – turns out, during her tenure as a teaching assistant in France, she had also taken a vacation trip to Morocco, and found that she’d liked it so much that she decided to stay. When I met her, she’d already been living in Marrakesh for several years. I would be lying if, at the end of my stay in Morocco, I didn’t consider doing the same thing.

Next – Travel Tips for Morocco

Praise for the Author? Cancel reply